The award was obtained in 2014

On Thursday 22 May 2014 in Denmark 100 professionals from 20 countries were gathered to celebrate innovation in the European Spa and Health Tourism industry. This award is given to those destinations, installations and initiatives which embody innovation in the true sense of the word.

As part of Category N°3, commending « The thermal innovation of Spa waters », the European Spas Association (ESPA) prize was given to the Compagnie de Vichy (France) for its culinary innovation using Vichy Célestins natural mineral water.

This healthy cuisine using Vichy Célestins mineral water is now available in the restaurants of the brands VICHY CÉLESTINS SPA HÔTEL 5*, VICHY THERMALIA SPA HÔTEL 4* and in the associated hotels of the THERMES DE VICHY.

What are the advantages of healthy cooking withVichy Célestins mineral water?

Unfortunately 88% of people in France believe that sparkling mineral waters contain too much salt. This is incorrect because their sodium content is regularly confused with sodium chloride, table salt, whereas sodium is only one of their constituent elements. Vichy Célestins mineral water contains sodium bicarbonate, which although tastes salty, should not be mistaken for sodium chloride, salt or table salt. In fact sodium bicarbonate does not have the same effects on the human organism.

For example, scientific studies have shown that sodium bicarbonate has no impact on hypertension. Vichy Célestins mineral water can, therefore, be consumed on a daily basis by all healthy adults: its sodium chloride content (salt) is 0.38g/l is comparable with that of tap water, which on average in France is 0.4g/l.

Other studies have shown the benefits of drinking Vichy Célestins mineral water: for example neutralising excess gastric acidity and reducing its production; helping with recuperation after physical exercise as a buffer to lactic acid; increasing skin hydration by up to 18%, which creates the famous Célestins complexion. 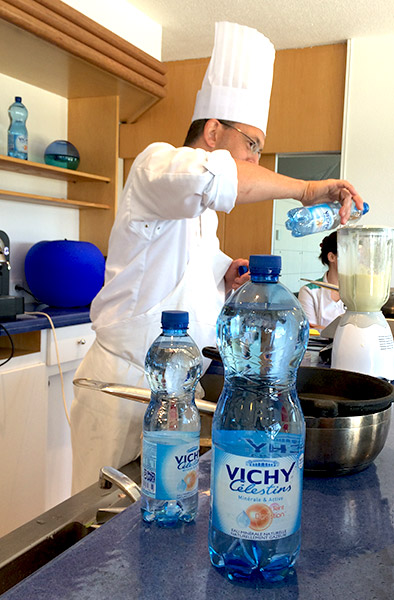 The Chefs at our international destinations take a training course in French cuisine with the Chef of the N3 Restaurant at the VICHY CÉLESTINS SPA HÔTEL (Vichy - France).

The aim of this training course is to pass on the key elements required in a healthy, varied and balanced cuisine with Vichy Célestins mineral water. A healthy cuisine which adapts to the needs of the individual: for example, having a balanced use of the Glycaemic Index ranking of carbohydrate-containing foods based on the overall effect on blood glucose levels and diabetes; relative to weight loss; for a whole body detox; or anti-ageing prevention;...

For clients, a personalised review and balance of eating habits is undertaken by the medi-spa centre's doctors, dieticians and nutritionists.

"Health, Taste and Pleasure" dishes are included in the A la Carte menus at all Restaurants.